What is the cause? The gene called CLN1 lies on chromosome 1.  CLN1 disease is inherited as an autosomal recessive disorder, which means that both chromosomes carry mutations in the CLN1 gene, and both parents are unaffected carriers.  The gene was discovered in 1995.  CLN1 normally directs production of a lysosomal enzyme called Palmitoyl protein thioesterase 1 or PPT1.  A deficiency of PPT1 results in abnormal storage of proteins and lipids in neurons and other cells and impaired cellular function.  The cells cannot function as they should and symptoms develop. 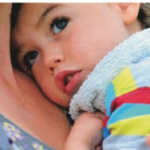 How is it diagnosed? The diagnosis is usually made by enzyme (PPT1) and genetic (CLN1) tests on blood samples.   Occasionally a skin biopsy may be necessary.  Granular osmiophilic deposits (GRODSs) are the characteristic storage body at the electron microscope level.

Does it have any alternative name? CLN1 disease was first described in the 1970s in Finland and is sometimes called Haltia-Santavuori Disease, Infantile neuronal ceroid lipofuscinoses, or INCL.

How common is it? 1-2 children are diagnosed with infantile Batten disease each year in the UK.  We estimate there are between 5 and 10 affected children in the UK.  Children have been diagnosed in many countries although when the condition was first described most cases came from Scandinavian backgrounds.

How does the disease progress?  Genotype/phenotype correlations: Classical CLN1 disease, infantile Babies are healthy and develop normally for the first few months of life.  Towards the end of the first year, developmental progress starts to slow down.  Infants may have difficulty sleeping through the night and may become more restless and irritable during the day.  Some infants develop repetitive hand movements and fiddling.  They often become floppy and developmental skills such as walking, standing and speech are lost.  Children become less able and increasingly dependent during the toddler years.  By the age of 2 years, most will have epileptic seizures and jerks.  Vision gets worse until they are no longer able to see.  From the age of three years, children are completely dependent, unable to play, feed themselves, sit independently or communicate  They may need a feeding tube and their arms and legs usually become stiff.  Some children get frequent chest infections.  Death usually occurs in early to mid-childhood.

CLN1 disease, juvenile Some children with mutations in CLN1 have a later onset of symptoms and slower disease progression.  Occasionally the symptoms resemble those of children with mutations in the CLN3 gene and juvenile onset disease, with onset around 5-6 years of age.  They present with behavioural difficulties and early visual deterioration followed by seizures in mid-childhood.  Death commonly occurs in the teenage years.