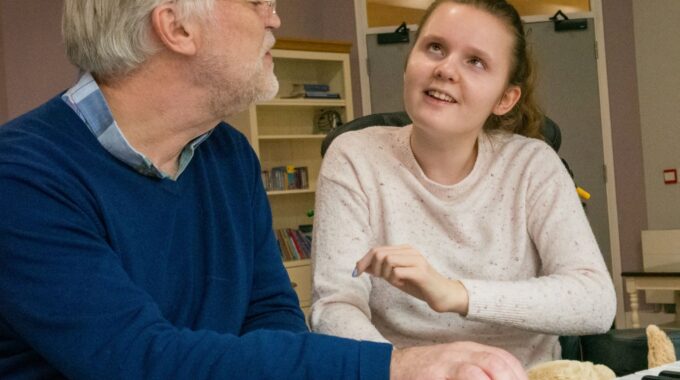 “Through music, the children were able to bond with each other and work together.”

Adam Ockelford, professor of music at the University of Roehampton and founder of The Amber Trust, tells the story of how his charity uses music to enrich the lives of children with Batten disease.

I can clearly remember my first meeting with a child with Batten disease – around 40 years ago. I was team-teaching with colleague called Lina, who had special training in working with children with learning difficulties. We were responsible for a class of nine and ten year olds, who were visually impaired and had additional needs, at Linden Lodge School in Wandsworth. A new boy, whom I’ll call Cahil, had just arrived from Turkey, and the head teacher said he should go in our class. We were told about his condition (he had Juvenile Battens) and the head suggested that we should talk to other teachers at the school who had experience of working with children with neurodegenerative disease. That was the sum of the advice we got. There were no formal guidelines as to how to teach someone who was fast losing his sight and other faculties, as well as having English as a second language.

Music as a bond

Unsurprisingly, Cahil had trouble settling in his new school and class. His limited speech in English was rapid and hard to understand, and it must surely have been extraordinarily difficult for him to grasp what was going on: who the strangers all around – adults and children – were, and what was expected of him. Life for Cahil was obviously confusing and frightening, and Lina and I were determined to find a way of improving things.

The answer, as it turned out, was right in front of us. Lina and I used music a great deal in the day-to-day lives of the children in our class, who all had severe learning difficulties as well as being blind. The day began with a simple song of greeting, and then different songs were used to initiate activities throughout the day. When it was time to finish doing something, a song warned the children of what was about to happen. Through music, the children were able to bond with each other and work together in a way that would not otherwise have been possible. And it was through music that Cahil formed his first friendships at Linden Lodge. Through our regular singing routines, he got to know what was happening next, and when the day was about to end and he could go home. It was through music that he was able to relax and enjoy his time at school.

I remember thinking, then, that I would love to create a music scheme from which all children with Batten disease (and other neurodegenerative conditions) could potentially benefit. However, it is only recently, through a charity that I established around 25 years ago, The Amber Trust, that the opportunity presented itself.

Amber supports visually impaired children, including those with additional disabilities, in their pursuit of music, across the UK. Of the hundreds of children we help each year, a small proportion have Battens – and, four years ago, working with 12 families, we set up a research project to find out more about the place of music in their lives and what we, at Amber, could do to help them.

‘With Music in Mind’

Three years later, we were able to produce the first set of resources for families, and a new service, ‘With Music in Mind’ was born. ‘With Music in Mind’ was devised especially to help children with neurodegenerative disease and their families to use music to enhance living and learning as these develop with their children’s changing needs. The support that Amber offers may take the form of payment for music lessons, or the purchase of an instrument. We have set up a national network of trained practitioners who visit families and help them make the most of music to sustain communication with their child when speech alone is difficult, to maintain friendships and, above all, to continue having an area of life that is enjoyable and fulfilling.

If you would like to know more about With Music in Mind, please do get in touch by visiting https://www.ambertrust.org/withmusicinmind/. We look forward to hearing from you!