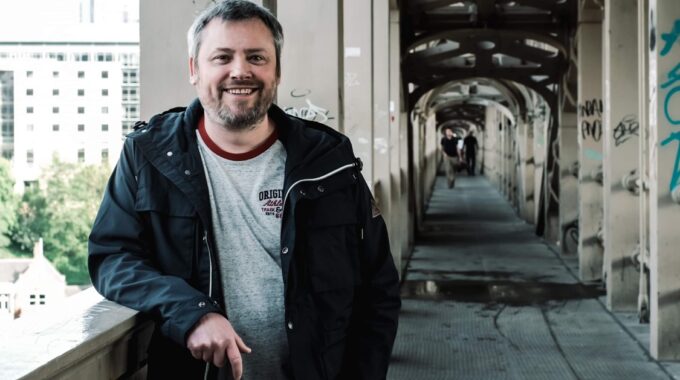 “I wasn’t sure what I could do to help, so, as well as other fund raising I chose to release music.”

David McGovern, who owns the record store Beyond Vinyl in Newcastle Upon Tyne, tells the story of why he is a huge supporter of the Batten community, and how he hopes his charity single will help.

So why am I releasing music even though I’m not a “proper musician?” Who do I think I am??

… I’ve always wanted to release music but due to being shy and lacking in self-confidence, I never did.

… when I found out about Batten disease from a friend, I looked it up and was horrified at what I was reading. What the families and the children affected by it go through is heart-breaking.

What is Batten disease?

The easiest way to describe Batten disease for those that don’t know about it, and without going in to the complex details, is that it’s like dementia and motor neurone disease that affects very young children. And it is terminal, so results in the death of the child. Depending on the type of Batten disease the child would usually live to around eight years old with the most common form of the disease. Children with other types of Battens might live into their teens and sometimes early 20s.

Some of the issues caused by Batten disease in children are blindness, complex epilepsy with severe seizures, jerks of limbs, difficulties sleeping, the decline of speech, language and swallowing skills and a deterioration of fine and gross motor skills that result in the loss of mobility. Other symptoms commonly seen are hallucinations, memory loss and challenging behaviours. Ultimately the child or young person will become totally dependent on their family and carers for all of their needs.

The families and children affected by Batten disease are some of the most positive and loving people, and they never give up hope. To be honest I really don’t know how they do this, but unless you are in their situation I suppose you can’t. I’m in total awe of the families and everything they do.

I wasn’t sure what I could do to help, so, as well as other fund raising I chose to release music.

I may be mocked for releasing music, for the way I sound, for not being totally polished, but that is nothing compared to what the children with Batten disease and their families have to deal with.

It would be amazing if everyone could order the single I’m releasing which is a cover of INXS’ ‘Beautiful Girl’ to help raise awareness of Batten disease and urgently needed funds for the BDFA.

There is a link to buy David’s limited edition CD single ‘Beautiful Girl’ on the BDFA website https://beyondvinyl.co.uk/…/david-mcgovern-beautiful…/