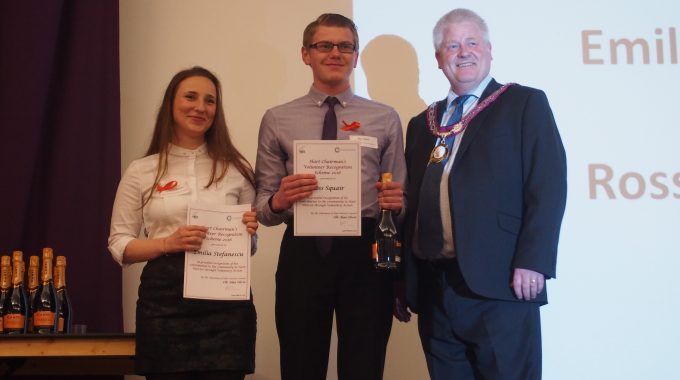 On the night of 22nd March, two of the BDFA’s volunteers were nominated and presented with certificates of appreciation at the Hart Volunteer Recognition Event held at The Harlington in Fleet. Andrea West nominated Emilia Stefanescu, who is working as a Social Media Volunteer, and Ross Squair, who is working as an Admin Volunteer at the BDFA offices in Farnborough, for the Hart Chairman’s Volunteer Recognition Scheme 2016. The event was organized by Hart Voluntary Action and 14 charities were nominated from the Hart district. The certificates were personally given by Councillor Alan Oliver, the chairman of Hart District Council.

Councillor Alan Oliver started the ceremony by presenting the certificate of appreciation to Emilia and Ross, after talking about the work of the BDFA. We also heard about the amazing work of charities across the Hart district and got to meet lots of interesting people.

Andrea West said: ‘Emilia has been a tremendous addition to the BDFA team, helping us to raise critical awareness of this group of very rare and devastating diseases commonly known as Batten disease. The knowledge and experience she brings to her role as social media volunteer has enabled us, as an organisation, to increase our reach both to affected families but also to potential supporters across Hart and beyond.  Emilia typifies what it is to be a volunteer, her commitment to us as a charity and the families we work with is very clear and we are all enormously grateful for everything she brings to our work.’

Talking about Ross, she said: ‘Ross joined the BDFA as an office and admin volunteer and was one of our first volunteers when we moved into our offices in Farnborough. He quickly became part of our small team and performs an invaluable role in maintaining and updating our database. This is a time consuming but essential role, that as a small charity we rarely have the resources to maintain. Small charities like ours could not operate without the strong commitment of volunteers like Ross, and an award like the Hart Chairman’s Volunteer recognition is a way in which we can show him how much his contribution means to us.’

We are very excited to announce our Charity lunch in the Long room at Lord's:…

Improving the diagnosis and understanding of Batten Disease

A description of the groundbreaking work of Dr Sara Mole and her team at UCL.…

Our new newsletter and Batten Bulletin is  available for you to download.  Read about our…