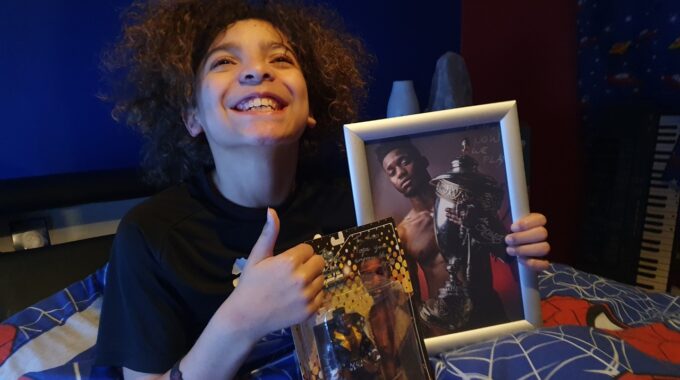 “It was then that I was told that Leo, our little boy, our baby, has a life limiting and fatal condition.”

Mum, Lara Olivacce tells the story of her 13-year-old son Leo’s diagnosis with CLN3 and the importance of talking openly and seizing the moment.

I remember the day when Leo’s teacher told me during one parents evening that he was asking to sit closer to the whiteboard as he was saying he couldn’t see what she had written, he was six at the time. I booked him an appointment at the opticians the next day; little did we know that this would be the first step into a journey that would forever change our lives.

Over time Leo was prescribed numerous prescription glasses, but his eyesight didn’t improve, in fact it got worse, to the point where he couldn’t look straight anymore and would turn his head to the right and look up, using only his peripheral vision. He started to refuse to go to football practice or street dance classes, two activities which he loved and would attend weekly. He would tell us that he couldn’t see the football anymore and that he was too embarrassed to dance in front of others because he could no longer see what the instructor was teaching the class.

We requested a referral to an eye specialist who could possibly give us some insight into what may be happening to our little boy, but when we saw the specialist, he told us it was all behavioural and that there was nothing particular wrong with Leo’s vision! But I knew something was wrong, I know my child and as a mother we have an intuition that tells us when something isn’t right. That was confirmed when I took Leo to see a new optician who made me aware that there was indeed something wrong with Leo’s vision, he told me to request an immediate appointment with Moorfields eye hospital.

From there we were finally referred to Moorfields where we had several appointments consisting of multiple tests for Leo, who was so brave and didn’t complain once. They mentioned the possibility of a condition called Stargardt disease, an inherited disorder that causes vision loss, but they said they would need to carry out one more test, a genetic blood test to confirm or rule out certain conditions, but they wouldn’t tell us what those conditions were. The next time we heard from the hospital it was a phone call to say they’d booked us in for a follow up appointment the following week.

My husband Mark had just started a new job and so when that day came I told him not to worry about coming to the appointment, a decision we would both later regret. At the time we were both feeling quite naively optimistic that the hospital most probably hadn’t found anything just like all the previous tests and that everything would be fine. So my mum came with me instead, but when we got to the hospital they wouldn’t let my mum in the room, and that gut feeling came back again, something was wrong.

Tuesday 10 May, 2016 at approximately 3pm life as we knew it changed forever. I was sat in a room with a specialist and a paediatrician who were telling me that Leo’s vision would continue to get worse and that eventually he will become blind, that he will develop seizures and over time he will have trouble with balance, with walking, talking, and swallowing. I remember responding with “OK” to everything: blindness, OK, seizures, OK, deterioration of walking, talking, OK. I think I just completely went into shock but I remember asking, “Ok, so he will be dependent on us and stay home with us for his whole life, so what about things like school and college?” And as soon as I mentioned the word ‘college’, the paediatrician sighed and looked down, I looked over to the specialist and asked, “What are you guys trying to tell me?”

It was then that I was told that Leo, our little boy, our baby, has a life limiting and fatal condition. I remember just completely losing it and breaking down. The specialist tried to reassure me by telling me to be hopeful, that there were researchers out there working really hard to develop a treatment. After a few moments I asked, “What on earth is this condition?”

That night me and Mark stayed up all night Googling, looking on YouTube, reading article after article and research papers, searching for answers, thinking that there has to be a cure, there has to be something we can find, and this cannot be happening, we cannot lose Leo to this.

That was five years ago, Leo is now 13 and since then he has lost 90 per cent of his vision, has now developed epilepsy, sensory disorder, progressive dementia, complex and challenging behaviours, and he is now experiencing some issues with swallowing, and we know that all of this is only the beginning of what is to come.

We live a new life now, a new normal, our normal. As a family we have now learned to live with anticipatory grief, it’s just a part of our lives now, but every so often the reality of the situation hits you and it’s enough to bring you to your knees. We simply cannot fully comprehend a life without Leo.

We’re a family who talks very openly and honestly about our thoughts and feelings, which is so, so important. It’s imperative to have an open dialogue and to not feel ashamed or embarrassed of expressing emotions, especially for families like ours who face the unimaginable. Carers are often viewed as ‘brave’ and deemed as ‘heroes’, and families like ours are often called ‘strong’ and that’s fine, it’s actually pretty true because at times we really do have to be so mentally and emotionally strong through such devastating journeys, but we’re also human and we need to remind ourselves of that, and remind others too.

As a family we now ensure that every single year is spent going on adventures, vacations, creating new experiences and new precious memories. Leo is WWE mad so for his wish from ‘make a wish’ we went to watch a live WWE match and met some of Leo’s favourite wrestlers, it was so awesome! The kids wanted to go to Disneyland, so we went to Disneyland. The kids wanted to go and see their family in the Caribbean, so we made that happen. Go camel back riding through the deserts of Egypt? Why not! If there’s one thing that Leo’s diagnosis has taught us, it is to seize the moment! Make life an adventure!

Our Leo has been a true inspiration to all of us. Despite everything he goes through with Juvenile Batten disease and everything he faces, he continues to smile and laugh every single day and will find the humour in almost anything. We are so thankful that Leo is very strong willed, that he’s still very active, talkative and sociable. Every single day we continue to feel so inspired by him and to feel so blessed to have our Leo.