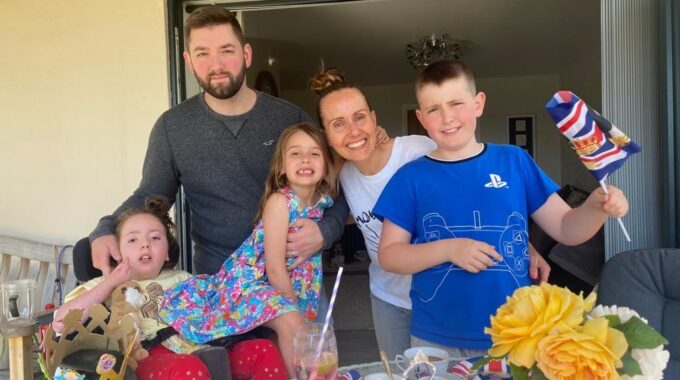 “I would describe myself as very hands on dad and I love being able to look after Nicole and Jessica and their big brother Louis who is amazing.”

Matthew Rich is dad to Louis age 11, Nicole age 10 and Jessica age 6. Matthew talks about the devastating impact on their family of having both daughters diagnosed with CLN2 Batten Disease. He talks about how the family advocates for not only their daughters, but the whole Batten Community.

Life was carefree and happy, we would regularly visit family around the country, and we had a lovely life as a family of five. I went out to work and Gail looked after the children. Gail spent lots of time at baby and toddler groups. We had no health issues apart from the usual colds and flu every now and again. It was a simple and lovely life. We still have a lovely life… it is just not the life we had envisioned as we started our family life… and is definitely not as simple!

The long road to diagnosis…

Nicole was diagnosed with CLN2 Batten Disease on 16th September 2016, when she was only 4.5 years old. It had taken two and a half years for Nicole to be diagnosed from the initial concerns of lack of speech and language at her two-year health visitor check.

We had been watching Nicole regress without knowing it. We had no idea she was losing skills and abilities because of a neurological condition.

Nicole had speech and language therapy, which did not bring the expected results. Everyone said that she would soon start talking when she started school, and whilst she was amongst other children chatting away. Sadly, this was not the case and so we took her to see a paediatrician just to be ‘checked over’. We took her purely, we thought it was ‘just’ her vocal chords not working, what we were told was beyond anything we could imagine!

They did a series of cognitive and behavioural tests and that day Nicole was diagnosed with Global Development Delay. A few days after she had her first seizure. Quickly after Nicole’s first seizure, she had an EEG, which confirmed focal epilepsy. We rather went along with life for the next few months, thinking this was the worst it could be, but we were wrong! We then started to notice Nicole was falling and being ‘clumsy’ which she had never ever been. She was covered in bruises and would come home with accident forms from school.

We kept going back to our doctors and explained ‘something wasn’t right’. We were told that they thought there was an underlying syndrome, but that they didn’t know what it was. They said that we might never find out what it is. Nicole’s mobility got worse and so we insisted they find out what was. Gail and I handled it very differently. Gail didn’t want to know anything, even saying the word ‘Batten’ was too much. Whereas, I went straight onto Google, I wanted to find out as much as I could.

When Nicole was eventually diagnosed, our entire world fell apart. It is hard to put into words the pain we felt, because nothing could even come close to articulating it. It was a physical pain. Our job as parents is to protect our children, but we were powerless against this disease and could not stop it. The days following were like living in a nightmare, which we could not wake up from. It was indescribably difficult to want to break down, but not being able to, as you had three young children who still needed feeding, changing and taking to school. They kept us strong for sure, and they still do now.

Our hearts broke into a million pieces once again

As Batten Disease is genetic, we knew there was a chance that Jessica might have it but as she was already saying ‘Mammy & Daddy,’ and was developing differently to Nicole. We were convinced she was OK. In December in 2016 our worst fears were confirmed, we were told that Jessica also had CLN2. Jessica’s diagnosis was unexpected in that we felt 99.9% certain she would be ok.

Our hearts broke into a million pieces once again. Desperation and despair were the overwhelming feelings. I am a very practical person, which I think helps me in this Batten life. I get through difficult situations by ‘doing’ and feeling as if I am controlling the situation by being prepared and organised

Whilst trying to come to terms with what this diagnosis meant for our girls, and our family. A new life had begun, we were instantly thrown into a life of hospital care, medical professionals, experts, forms, services – the list is endless! We became nurses, dieticians, occupational therapists, physios and neurologists (along with everything else)

Your life changes in an instant. Your perspective on what is important and worth worrying about changes. Making memories becomes a priority, taking photos to remember moments in time and appreciating each day.

We are very fortunate that both Nicole and Jessica were able to start Enzyme Replacement Therapy. This is specific for their form of Batten (CLN2); it was a huge thing to know that our girls had to undergo brain surgery. This was to prepare them for their treatment. Signing the consent form for surgery was the hardest thing I have had to do!

Firstly, we had to take Jessica to Hamburg in Germany to start treatment and as she was so young. It was especially hard to sign the consent forms, as she was just a little baby, a perfectly healthy baby. We did not want her to need to have brain surgery, but we knew what was coming if we did not do it. We had to switch off our emotions and think practically.

We have become advocates for the Batten Disease community, and are always looking at raising awareness and have a positive impact. We always say ‘we can’t control the disease but we can control how we respond to it’ – so we chose to stand up, speak up and try to make a difference.’

We have had to learn how services, systems work and policies work. We had our eyes opened to how unfair many things are for rare disease families. We have built good relationships with MP’s and Patient Organisations, which we are proud of. We want to stand up and be the voice for our children, and every child who needs and deserves the right to life the best life they can.

Carers as well as parents

I eventually had to leave full time employment, and now I am a stay at home Dad/carer. Gail and I both struggled to class ourselves as ‘carers’, we are parents and our role is always to care for our children. However, we understand it relates to the level of care needed, and is above what would be expected, and our parenting role is more specialised. Nicole’s complex health needs are high, as she is fully dependant on us; this is for every aspect of her care and family life

Nicole has the most wonderful quality of life, and enjoys so many activities at school and at home. She is the strongest little girl you could meet and is a true inspiration.

Hospital became our second home, having gone to Hamburg (where Jessica started treatment), London and now Newcastle every two weeks for over 5 years. I have never missed an infusion, and I always like to know as much as I can about procedures and practicalities. I would describe myself as very hands on dad and I love being able to look after Nicole and Jessica and their big brother Louis who is amazing. As it is just Gail and myself we are a team, and we always try our best to support each other and I think we do a pretty good job at that!

So much has changed, and the life we had before Battens is a distant memory, we still have a life filled with love and adventure. The adventures are much more structured and everything is considered and planned out in advance!

We have had to adapt to so many changes in Nicole’s health, and we have learnt to be resilient. We take what we are feeling out of things, and focus on what Nicole needs. This is always what is best for her and how to help her to be the best she can be.

Batten has given us a different outlook on life. We tend to live more in the moment and do not let Battens stop us from doing things. We recently went on holiday to Dubai. It takes a lot of organising and planning. We take everything into consideration when flying, and what we will need to pack. We plan for every eventuality and pack accordingly. We want to give the children every opportunity to experience as much as they can.

The highs of our journey is meeting other parents/people who understand our similar journey, connecting and making friendships. Seeing the bond between our children is incredible and it only grows stronger by the day. We have been shown such love and support by strangers and feeling the love for your children from lots of different people is very uplifting. This love and support has carried us through the difficult times because you know you are not alone. The diagnosis that Nicole and Jessica has received of CLN2 Batten Disease, has given us a new appreciation of life and how important it is to live for the now, and be grateful for every day.

The lower moments are, notbeing unable to control what is happening. It is hard watching our beautiful brave daughters having to go through lots of different medical procedures. Batten disease is the cruellest condition and we have seen it devastate our entire family. We have seen our son Louis struggle with what he can see is happening to his sisters. Your outlook on life instantly changes and nothing else matters but keeping your children happy and healthy. Knowing that our girls will need treatment for the rest of their lives is hard…. but we always live with hope that a cure will be found.