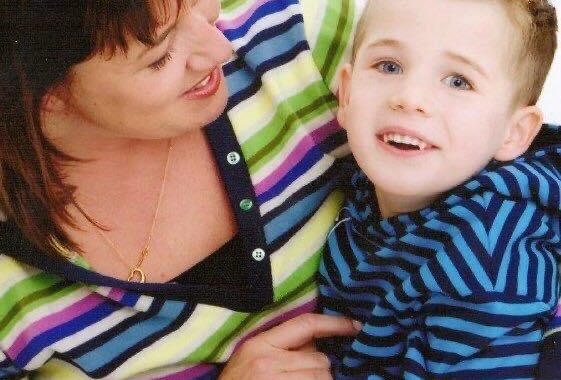 “Our lives became about getting through each day at a time and most importantly, making memories to treasure forever.”

Mel Hall shares her story of her son Matthew, who died aged 7 with CLN2, talking of the impact of diagnosis on daily family life.

I guess we would always describe ourselves as a “normal” happy go lucky family, very much part of our local community. Matthew, our second son was born a perfectly healthy, nearly whopping 10lbs. Our family was complete. Matthew thrived as normal toddlers do up to when he was just three. He was a typical second child; I had my hands well and truly full! He was a character, a blessing and a bundle of complete and utter trouble! He adored Peppa Pig and Thomas the Tank Engine and boy did he love sitting at level crossing waiting for the real trains.

It was February 2005. Matthew turned blue in the back of my car. Completely panic stricken a passer-by swiftly called for an ambulance. After being blue lighted to hospital, little did I know this was the beginning of a rollercoaster of extreme stress, worry and the most incredibly painful, heart-breaking journey. Over a very short time it became apparent that things were desperately wrong, and a battle was ahead of us to find out what exactly was wrong with our little blue-eyed boy.

Matthew’s milestones were slowly slipping away from us. What was going on? Every seizure Matthew endured, a little part of him left him too. After hundreds of hospital appointments from Cheltenham General Hospital, John Radcliffe to Great Ormond Street, being airlifted by the air ambulance twice, dialling 999 weekly, sometimes daily, mad dashes to the nearest A&E department, countless blood tests, MRI brain scans, lumbar punctures, muscle & rectal biopsies, EEGs, and being tested for many rare diseases we became desperate for answers. Nearly two years from Matthew’s first seizure we eventually got the diagnosis, we had been fighting for. We received the utterly devastating news from Professor Helen Cross at Great Ormond Street that our little man had late infantile Batten disease. Our world was turned upside down, we were completely devastated.

Late infantile Batten disease begins between ages two and four. The typical early signs are loss of muscle coordination and seizures along with progressive mental deterioration & blindness. This form progresses rapidly and ends in death between ages eight and 12.

How are you supposed do you deal with this? How are you supposed to come to terms with the fact that your child is one of just eight at this time in the country? And then there’s the utterly incomprehensible conversation with your child’s paediatrician that your son is slowly deteriorating before your eyes and this dreadful disease means your child will not survive this. Matthew was a healthy, normal child. We had become a family being torn apart by genetics!

We were referred to Dr Ruth Williams at The Evelina hospital in London who was exceptionally supportive. Matthew took part in her research studies to study the regression of this disease. During this time, trials in China were starting to take place where stem cell transplantation was an option, but Matthew had regressed too far.

A small but growing community

Dr Williams signposted us to The Batten Disease Family Association. The BDFA was a tiny charity primarily made up of a handful of family members, there was only a tiny chat forum on their website where I remember posting questions about the disease and a reply would pop up months later. It was a really lonely journey.

Thankfully over time social media platforms were starting to be formed, albeit slowly, as well as the charity and a lovely network formed of parents and family members who could virtually chat to each other supporting one another.

The doctors learnt valuable experience from Batten children during this time as hardly anyone had heard about this disease, they all took great interest in it. To date Matthew is still the only child known to have been diagnosed with late infantile Batten disease in Gloucestershire.

Our lives swiftly changed as soon as we had Matthew’s diagnosis where our household became a home geared up to look after a profoundly disabled child the best we possibly could. I became a full-time carer for Matthew, and Chris (his Dad) made sure that Matthew’s brother Tom was affected as little as possible. But ultimately everything changed, and I won’t deny, we really did struggle at times. Every part of our lives we had once taken for granted had changed. Our lives became about getting through each day at a time and most importantly, making memories to treasure forever.

Matthew’s health took a dramatic turn for the worse on his 7th birthday. We cancelled his party and, in a whirlwind, we found ourselves watching over Matthew on life support at Bristol Children’s Hospital with the worst possible chest infection causing a severe pneumonia. After 10 days on life support we knew that Matthew’s short little life had ended and we had to let him go. Matthew was moved from Bristol Children’s Hospital to Acorns Children’s Hospice in Worcester to their beautiful Special Bedroom. This allowed us time, so we could be with him as much as we wanted to say our final goodbyes before his funeral.

Our treasured Matthew passed away 10 years ago. We should all be celebrating his 18th birthday this November. Not a day goes by where we don’t think or talk about him. A very special little boy who will always be loved and remembered fondly by so many.

I’m now the exceptionally fortunate mum to have pathed a career from our rare disease journey and am so grateful to work for my local children’s hospice. I promised Matthew I would keep raising awareness of Batten disease and ultimately try to help others where I could. It’s a fitting tribute to Matthew but also it has helped me to turn the most heart-breaking journey a parent could ever go through into a little bit more of a positive one. I know my Matthew would be very proud and be ‘high-fiving’ his Mum.