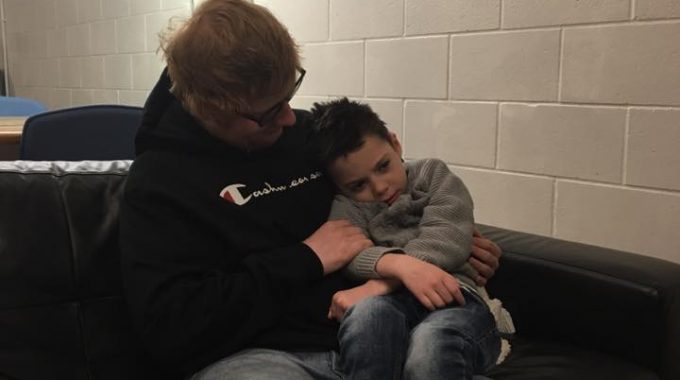 We have the most incredible news to share with you all!

Last night our little boy met his hero. Through the power of social media Ollie’s story reached Ed Sherran. Ed and his team were so touched by Ollie’s story that they invited Ollie, Amelia and our boys backstage at the MEN arena last night.

Ollie who once knew all the words to Ed’s song, who used to sing along can no longer talk. Ollie who used to stand at the television watching Ed’s videos can no longer stand and see. However the power of Ed’s voice has pulled Ollie through the hardest and darkest of times. Ollie listens to Ed’s songs through his many hospital admissions, his songs have even helped him get through brain surgery.

As soon as Ed walked into the room yesterday and spoke Ollie’s eye lit up and a smile spread across his face. This image was priceless.

Ed spent time with Ollie and gave him the biggest of cuddles, he had high fives with Amelia who was completely in love and couldn’t stop staring at him.
Ed spoke to our older boys and answered all their questions and of course had a selfie!

Ed is one of the loveliest guys we have ever met, he asked us to explain Batten Disease and Ollie’s Army. He was truly saddened by our journey.

To us last night Ollie wasn’t meeting a star he was meeting HIS star, he was meeting the man that taught him the power and love of music. As parents we can not thank Ed, his team and every single person who shared Ollie’s video, and emailed Ed’s management team enough.

We never thought this would happen and through the power of social media it has.

Our dying boy wished to meet his hero, last night that wish was granted