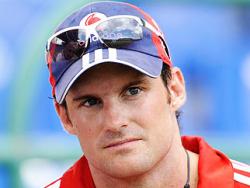 The BDFA are delighted to announce that Andrew Strauss has become a BDFA Patron.  Andrew Strauss is one of the most respected and highly rated cricketers in the world and he has been involved with the work of the BDFA for a number of years including both the highly successful “Batting for Batten’s” events.

Strauss has gained international recognition for the way in which he continues to conduct himself both on and off the field. With bat in hand the 32-year-old has forged the reputation of being a brave, resourceful and dependable opener. As a batsman he leads by example, making valuable contributions in tricky situations when his side needs them most. In the five years since making his Test debut he has never shirked responsibility, working tirelessly at his game and regularly giving the England team the platform it requires at the start of a Test innings. Off the field Strauss has done an enormous amount to promote the game too. When dealing with supporters and the media he is always polite, honest and happy to give of his time.

We look forward to working together to raise awareness and continue to the fight against Batten Disease.