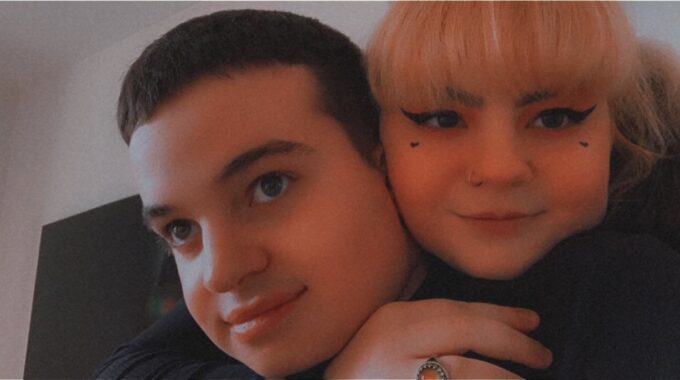 “We have enough worry to deal with daily. Constant battles are exhausting and so unnecessary”

William is 18 and has CLN3. His mother, Maria Minns, talks about how she has always had to fight to get William what he needs, and how now he’s entering adulthood, the struggles continue.

When William was born on 11 May 2003, it was absolute joy. He was a C-section, unlike his sisters, and when I called through the screen, “How is he?” the reply came back “He’s absolutely perfect, and weeing all over me!” He always laughs at that story. His older sisters Molly and Scarlett loved having a baby brother, and he was a happy, strong willed child.

In 2009, when William was six, everything started to change. On a family holiday William found a little bow and arrow which he loved, but after firing the arrows he couldn’t find them even when they were right in front of him. It became apparent that he was having trouble seeing, so we took him to the opticians. That was the start of our long journey. One year, three opticians and four hospitals later, we found ourselves at Great Ormond Street Hospital for a blood test. We didn’t know exactly what for.

Six weeks after the test William’s dad and I travelled from Suffolk to London for the results. And there we were told: it is CLN3 Batten disease. We didn’t know what that meant, but as the doctor told us more about it and then said it is life shortening, everything went blank.  The bottom fell out of our world!

Unfortunately, we were simply handed an out of date piece of paper with BDFA written on it and told to contact them for more advice. We were not contacted again by the specialist or the hospital. We felt completely lost and alone. That journey home from London was the longest journey ever. Trying to hold ourselves together on a crowded train for four hours.

I remember walking through the door when we got home to be greeted by William who shouted, “What did the doctor say Mummy?” I picked him up, held him close and said, “We’ve got to love you and hug you.” My Mum, who had been taking care of the children for the day while we were in London, saw the tears in my eyes and knew something was very wrong.

Luckily William’s school at the time were fantastic, and the SENCO put us in touch with Kim Hodge, the multi-sensory and visual impairment specialist at Suffolk County Council. She has been brilliant all through and ended up working with us for ten years, until a change in her job a year ago. All the support that we found and have now, is mainly thanks to Kim and the school. We had no other help or advice from anywhere else.

We didn’t tell our daughters until a year after the diagnosis. We just didn’t know how to say it. When Molly was 14 and Scarlett was 11 we sat them down and explained to them what we knew about Batten disease. In telling them we experienced their grief with them, and went through our own all over again. Life as we knew it completely changed, and has continued to change over the last 11 years.

William has just turned 18 and he is the most incredible young man. In 11 years he has lost his sight, developed language, behaviour, seizures and mobility issues, all associated with Battens CLN3.

He stayed in mainstream school as long as he could, until he was ten, helped by the school accessing resources for him, and one of the teaching assistants teaching herself braille so she could help William with that. At ten he moved to the Warren School which is a specialist school. They have been brilliant working with us, taking support and advice from Barbara Cole and Sarah Kenrick, and giving Will one-to-one, and now two-to-one support.

William is fully aware that he is different and there are problems. The thing that upsets him more than anything is that the Battens gene has messed with the wires in his brain so he can’t see. He often gets anxious and says “I want my life back.” It’s been an incredibly hard journey.

He’ll be at the Warren School until he’s 19 and then next year he’ll go on to SENSE for education and social activities.

It feels like I have had to fight for everything for William. I fought for four years to get him respite care, and he had a year of regular weekend breaks at a centre, but when Covid-19 hit, he stopped going. Now he’s 18 they can’t have him anymore.

We’ve just made the move to adult continuing healthcare. I have done a two and a half hour review, and shockingly they have deemed William not eligible for continuing healthcare. This will now go to a panel, and if they agree with the findings, then I will need to go through the appeals process. So I need to go through yet another fight. Luckily I will have the BDFA, plus our social worker and school to help support us.

But it shouldn’t be like this. We have enough worry to deal with daily. Constant battles are exhausting and so unnecessary! William just doesn’t tick boxes or meet their criteria, but it’s clear he does need the continuing care. Why would his needs change just because he’s reached 18?

At diagnosis we were told life expectancy was between 18 to 25 years. Now he’s 18, it makes you think.

We’ve always said that we will always try to give William as normal a life as possible. We try to grab opportunities that have been thrown to us, even throughout Covid. In the past year we enjoyed being free of having to clock watch, and being together at home. He’s even had fun in the garden of his one-to-one on a ride on lawn mower!

In 2015, aged 12, William had the chance of a lifetime, going on holiday to Walt Disney World in Florida with a local charity. He only got his place two weeks beforehand, but we went for it and he travelled there with people he’d only just met, having to put his total trust in them, and had the most incredible holiday. That would never have happened if it wasn’t for the Battens.

The Battens diagnosis is the worst for any parent. We try to find these amazing pockets of wonderfulness.

No one should have to go through knowing they will lose a child. It’s not the natural order of things. When we got the diagnosis it was sink or swim for me. I had to swim. I have moments when I think I can’t do this anymore, but I look at my children and I think they need and deserve the best, so I crack on. If it’s a bad day, you can cry and stomp and shout, and if it’s a great day you can shout about that as well.

It’s not easy, but we carry on. And I’m thankful for the amazing people that can & do understand & support William.