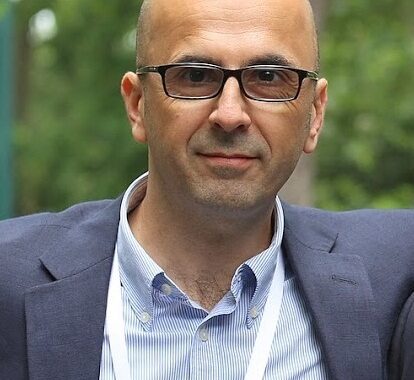 BDFA Chair, Zlatko Sisic, tells his story of how his own rare disease, medical training and experience give him the passion to create a better world for families and children affected by Batten disease.

I feel that destiny played a role in bringing me to the BDFA. It is an honour to be involved with this amazing organisation, and to give my contribution to improving lives of children with Batten disease and their families.

I come from Serbia, and I went to medical school in Belgrade in the late 80s, graduating in 1991. I started working as a junior doctor in A&E just at the time when the war broke out in former Yugoslavia. The experiences of a child and young man growing up in a multi-cultural and multi-religious society suddenly started to fall apart and that was a disastrous time for all of us.

In 1992, suddenly, on top of that I had my own devastating diagnosis. Having worked really hard for seven years to become qualified as a doctor, during my first year of work I was diagnosed with the rare disease Aplastic Anaemia. My whole world started to collapse very quickly. I was in hospital for three months in Serbia while they tried to treat me with what little there was available, and then I was transferred to St George’s in London for a bone marrow transplant. The only available bone marrow match in the world was registered with the Anthony Nolan Foundation, and that is how I came to the UK.

My disease, meanwhile, caused massive devastation for my family. My medical career that had given my family hope came to a crashing end and that affected my family a lot. My father’s life ended soon after that. He had a lot of his own illnesses, but he was affected by the fact I suddenly disappeared from his life when I was transported to London, and my parents couldn’t come.

This is where my personal experience of rare diseases and how they affect families comes from. I feel I can understand the core of the issue very quickly when I speak to families with Batten disease, and other rare diseases in which I’ve been involved.

Destiny can play a big part in shaping up your life and career. I worked at BioMarin from 2014 to 2020, and in 2016 I was asked to get involved in Batten disease as the European Medical Lead. Little did I know the profound impact this would have on me as a person as well as a professional.

I was involved in the launch of Brineura, a new drug for treating CLN2. During that time, I built relationships with world experts in Batten disease, and gained understanding of the disease itself, then I got involved in the negotiations with NICE, and also with the BDFA. My colleagues and I were contacted by many families from around the world desperate for the treatment. We did our best and worked very hard to bring the drug to patients as quickly as we could. But there were hurdles as part of the system, and in reality it’s a long process. It was a difficult and prolonged period which affected me a lot emotionally.

In the end we succeeded. Towards the end of 2019 NICE approved the drug for use in the UK and we were then really able to open up the treatment for all eligible kids. That was a really defining moment for me and everyone else, and a time of huge relief. It is a time I will never forget.

Becoming part of the BDFA

I left BioMarin in early 2020 and immediately joined BDFA in their effort to improve the lives of the families with Batten disease. I felt really privileged and honoured to join the BDFA. I started last year, working as their medical lead, and then in February 2021 I became Chair.

In the last 16 months the pandemic has prevented us from doing some of the projects we wanted, but we are ready and now we are planning research projects with outputs that will hopefully improve patients’ lives long term.

Things are changing. Not so long ago, there was hardly any clinical development going on around Batten disease. Now there has been an explosion of clinical trials assessing different approaches to treatment for different NCL disorders. My personal goal is to help BDFA pull together these efforts with various stakeholders.

The focus of the BDFA is to generate scientific evidence on how the disease impacts patients and their families so we can influence the policies which need to be adapted to suit patients with extremely rare diseases.

Our big goals are: reducing time to diagnosis, as this means children can be helped earlier and receive better outcomes; improving overall patient care; improving access to treatment, as currently the system isn’t tailored to getting children diagnosed with rare diseases the treatment they need quickly. To achieve these goals, we are collaborating with the UK based world-renowned experts in NCLs.

I have a massive desire to see the patients and families having their lives improved – that is my only motivation – and I’m pretty confident that with all the parties involved we can achieve that in time.

My mantra is “never lose hope.” It applies to the families and the professionals in the scientific community, and us in the BDFA too. I remember when I was diagnosed with aplastic anaemia in 1992 my chances of pulling through were very slim. 29 years later I am still here.

There is so much clinical development going for various subtypes of Batten disease now, so I say never lose hope. We have to put our efforts together to create a tectonic movement for a better future. That is my dream and my passion.