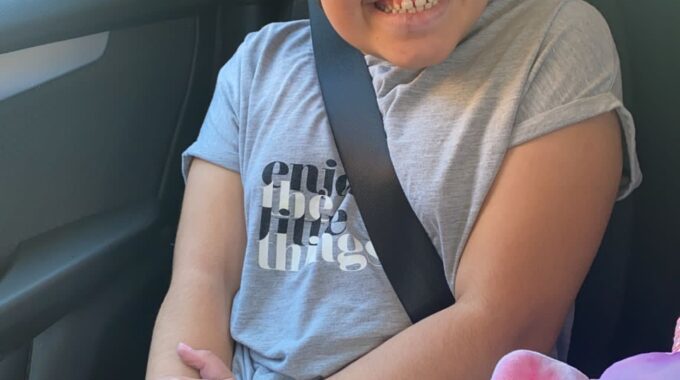 “To say it has been a battle is an understatement, but we remain positive.”

Kirsty Hartigan, mother to ten year old Ava-Bella and nine month old Frankie, shares her story about the struggles they have faced since Ava was diagnosed with CLN6 Batten disease. The family live in Hertfordshire.

When Ava first started having seizures she was seen at Watford General Hospital. But after they made no progress working out what was wrong she was referred to Great Ormond Street Hospital (GOSH) where she had more tests – and Ava was finally diagnosed with CLN6 Batten Disease. Following this devastating news, we were put in touch with the BDFA. We also had follow up appointments at GOSH and we were given ‘newly diagnosed’ support from both teams.

Alongside the Batten diagnosis, Ava has not been able to attend mainstream school, due to lack of access. I have worked hard alongside the BDFA, GOSH and the head teacher at Hartsbourne Primary School, Danni Harte, to try and get Ava back to school, with more support, and find the correct secondary placement for her. To say it has been a battle is an understatement, but we remain positive and keep fighting the system.

No help from Social Services

Not only have we struggled with Ava’s schooling, we have also had been denied support from social services who told us we “do not meet their threshold”.  We were denied transport to school, and help with our living arrangements. We currently live in a flat that is inaccessible for Ava and not big enough for the equipment she needs. At present I have to carry Ava into the flat, and cannot put the correct equipment in place as there isn’t the space for it.

Despite all the struggles we are slowly moving forward. Ava is now back at mainstream school for the last couple of months to say goodbye to friends, and I was able to buy her a school uniform – which brought so much joy to us all.

We are in constant contact with our support at the BDFA, Laura Lee, the Clinical Nurse Specialist, at GOSH and Ava’s school. We are awaiting our third assessment result from social services, and we are hoping for a more positive result. After months of fighting and back and forth, we have now been moved up a housing banding and after even more fighting we have also been accepted for transport to school.

Ava absolutely loves visiting her hospice, Keech Hospice Care. She loves music and one of her favourite things at the moment is kinetic sand. Ava also loves going on holiday, and we have spent time visiting local beach resorts and staying in caravans, as this is what Ava loves, and makes her happy. We hope to make more precious memories during our family holiday to Spain next year.