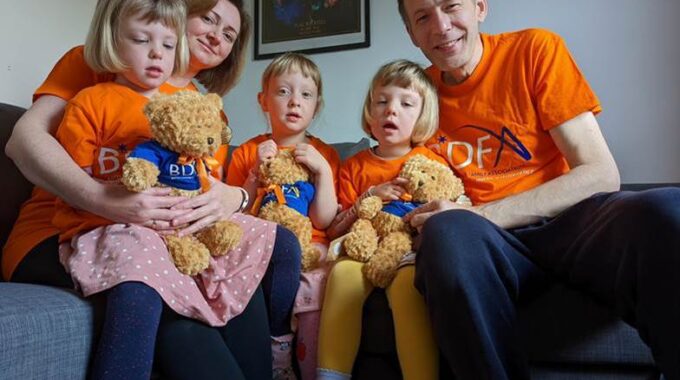 “We look for the things that make us smile or laugh in all of this.”

Marta Walotka, mother to four-year-old triplets Lena, Nina and Pola, talks about how she and her husband have coped with Lena and Nina’s CLN2 diagnoses and treatment by staying focussed on the small joys in life. Today, on awareness day, Lena and Nina will have their tenth infusion of Brineura at GOSH.

Three for the price of one

Our whole life has been full of surprises and unexpected turns, and we try to find fun and laughter in it all, no matter how difficult it is.

My husband Daniel and I live in Northern Ireland, and are originally from Poland. We had struggled to conceive naturally so had IVF. It was successful – and we then found out we were having triplets. We thought, “Wow, How will we survive this?” But then later we joked, “We tried for one and ended up with three? Buy one get two free!”

They were born prematurely at 29 weeks and we were blessed with three healthy girls, Lena, Nina and Pola. Because they were triplets and premature they had to spend their first eight weeks in the neo-natal unit, which was a challenge. As they grew we had lots of support from the local community, and the girls enjoyed going to playgroup.

When they were two years old we noticed that Nina and Lena weren’t hitting their milestones which raised some concerns. When the pandemic hit we were all at home in our ‘Covid bubble’ spending lots of time playing in the garden. We began to notice that Nina’s balance wasn’t so good and she was falling easily – much more than Pola. By the time she was two and a half she had started having seizures, her development had slowed down even further, and later she started to have jerks which meant she would fall more easily.

Because of the delays and seizures which were thought to be epilepsy, we were seen by the Child Development Clinic, Speech & Language Therapy, Occupational Therapy, and Physiotherapy, all under a paediatrician specialising in epilepsy. It was a relief to be in such good hands and to know that we were being looked at from 360 degrees.

At the start of September 2021, it was decided that Nina should have genetic blood tests done to see if there was an underlying cause. The results took two and a half months to come back, and on 15th December Nina’s result came back with a diagnosis of CLN2 Batten disease. After this Lena’s and Pola’s samples were also sent for genetics tests. Because Lena is Nina’s twin sister and also has seizures and developmental delays the doctor said it was more than 90% likely she had Batten disease too. This was confirmed by later results, and we discovered that Pola is only a carrier. Two of our girls with Batten disease… our world collapsed.

The 15th December was like a bad dream, and Daniel and I just asked ourselves, “Is this for real?” We took it in turns to look after the girls while the other researched online. The BDFA was the first website we found that gave us answers. The next day the geneticist called to check on us. He said he had heard of Batten disease, but this was the first time he’d dealt with it. He contacted Bio-Marin about the Brineura treatment available for CLN2, and they had said they would support us. He explained the treatment to us and we felt relieved that there was something we could do.

The geneticist organised everything, linking up the doctors and nurses and the team at Great Ormond Street Hospital. Everything happened very quickly and within three weeks we had travelled to London for the girls to have a stent put into their brain. By February, they had their first infusion.

Finding the bright side

When the geneticist had first spoken to us about Batten disease in December, his advice was to enjoy our Christmas as much as we could. I remember saying to my mum on the phone. “We have to live in the here and now and take it day by day,” and that is what we have done ever since. We also look for the things that make us smile or laugh in all of this, and we always seem to have some form of drama happening. After the first operation we couldn’t take the plane as planned so had to arrange to get a ferry home, another time we almost missed the plane, one day we lost a shoe on the journey so Nina had to walk in in just one shoe. We get by trying to enjoy each day and by looking on the bright side.

After the girls had had the operation in January we all caught Covid which postponed their first infusion by two weeks. Not being able to leave the house and needing to rest and recover forced us to slow down. We had time to take a deep breath and process all the information, and everything we have been through.

Now we are over the shock, and we have some balance back in our lives. Every two weeks we fly to London for treatment. Daniel and I joke and call it our ‘city break.’ It’s a routine now: we get home, unpack, and then it’s time to pack all over again. We all get very tired after the infusions, and sometimes my mum comes over for support. On 9th June – Batten Disease Awareness Day – our girls will be having their tenth infusion.

We have arranged respite care at a local hospice and in July Nina and Lena will have their first day there, meaning we will have some one-to-one time with Pola.

In London we have met other families with Batten disease and it really helps knowing people who understand what we’re going through, feeling we are not alone.

Now our girls are four, and they each have their own strong unique personality. They can fight like all siblings do, and we have a house full of laughter and tears. Having triplets and two with Batten disease is really challenging. They are always on the go. They try to do things and we find it so hard when they get stuck and frustrated, and when they fall and hurt themselves

When I stop and think about Batten disease I only have questions. What the heck is this? It’s so rare, why did this happen to us? I look at my girls and they are so beautiful and I just think, “Why them?”

It was so difficult to have our girls in the first place. Now we have them and they’ve been given Batten disease. It’s just so cruel.