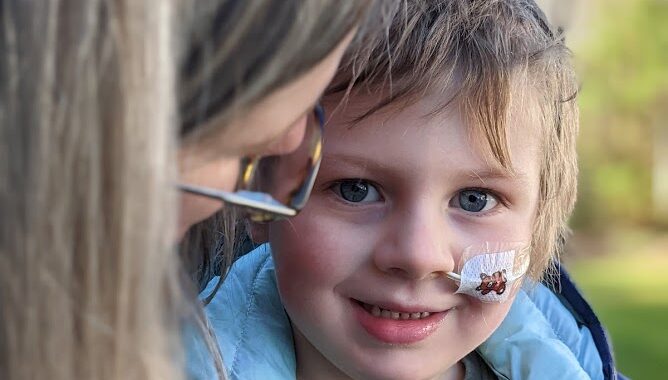 “A year ago Elliott was more physically able, more communicative, he was easier to play with…”

Claire Jackson, mum of 4-year-old Elliott, explains how hard it was to get a CLN2 diagnosis and why early testing is vital to prevent loss of skills.

In July 2019, at two years and ten months old, Elliott was seen by a local paediatrician. The referral was made by the health visitor and Speech and Language Therapy (SALT) team, with the thought that he would likely be referred to the autism assessment team – a referral was made. At the appointment with the paediatrician I stated that my husband and I had seen no development in Elliott over the previous six months; he had in essence stagnated in his development. I also commented that he had lost words.

He was globally delayed at that point. I had self-referred to SALT when he had just turned two, and he had been seen by them since Jan 2019. The paediatrician said that we could have genetic testing, however, they clearly suggested we don’t go ahead with it. I was advised that this process is a lot to go though and often these tests can show something unclear which causes undue worry. I remember they said that if we notice him regressing that we should come back to the service.

I had already stated that Elliott had “lost words” and feel that this should have been enough of a red flag. We thought about whether to go ahead with genetic testing but, regrettably, we took the advice of the paediatrician and did not proceed with it at that time.

If we had gone ahead with the genetic testing in July 2019, we could have potentially received the result and begun treatment at the end of 2019, in which case Elliott could have avoided 12 months of further regression. A year ago Elliott was more physically able, more communicative, he was easier to play with… we now know that early diagnosis is vital in terms of improving long term outcomes for children with CLN2.

The start of seizures and a new paediatrician

When Elliott began having seizures in December 2019, we saw a different paediatrician who referred Elliott for MRI and genetic testing. At a review appointment in March they were disappointed that the MRI and testing had not been carried out and he chased this, however, Covid-19 had begun and all tests and scans were paused. Elliott didn’t have his MRI and genetics testing until July 2020.

Our current paediatrician has been fantastic; his support of us, taking quick action, and making contact with us.

The importance of early diagnosis

When Elliott was seen in July 2019, there was a missed opportunity to achieve an earlier diagnosis. Elliott’s diagnosis will impact the rest of our lives, and things would have been somewhat different if he were diagnosed earlier. Of course, the further Covid-related delays are also frustrating.

Looking to the future, we feel that it is important to reflect on cases like ours if services are to achieve earlier diagnosis for rare diseases like CLN2.

This is the story of Elliott’s diagnosis. It is painful to think about. When we think of how Elliott was last year, he is a very different child now. He has lost a lot of skills and abilities. But in many ways, he is more settled, his seizures are far more controlled and we feel that the Brineura infusions are having a positive effect. We do our best for him every day and we try to make him as happy as we can.