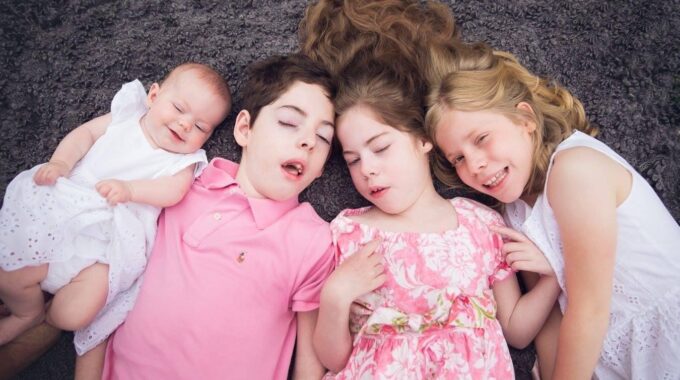 “I focused on the beauty that my children have brought to me…they are each my lotus flowers and Batten was the murky waters.”

Jennifer VanHoutan, mom to four children, two of whom have been lost to Batten disease, tells of how the symbol of the lotus flower keeps her looking for the good in life.

Five years ago, we had four beautiful children. Today, we have two at home and two angels. We have advocated for rare disease for 12 years.

After hitting normal milestones, our oldest child, Noah, had his first seizure at age three. This was the first of many seizures and serious progressive loss of milestones after three years. While the average time to diagnose a rare disease is about 4.8 years, ours was 16 painful months of consulting with doctors at five institutions and on 17 March, 2009, Noah was diagnosed with CLN2 Batten disease a month before his fifth birthday.

We learned quickly that Batten disease is a rare genetic disease.  Noah had CLN2 Battens and just as the literature read, he also showed signs around three years of age. A genetic mutation in a key enzyme (TPP1) impacts the body’s ability to process intracellular waste. Essentially, ‘trash’ builds up, particularly in the nervous system and retinas, and its devastating effect is only realised after the first few years of life.  Our first born was quickly regressing.

Our daughter Laine still had no symptoms when she and her twin sister Emily were tested for CLN2 Batten disease at three and a half years old, shortly after Noah was diagnosed. The first test showed that Emily did not have CLN2 Batten disease, but that Laine’s test results were inconclusive. As we waited several more weeks for more tests to be run and rerun, our family and friends prayed with us for a miracle. Sadly, it did not come to be. Our world shattered again when we learned that Laine had CLN2 Batten disease. It was 17 August, 2009, exactly five months to the day when Noah was diagnosed.

While we were ‘lay people’ with no medical, policy, or research background, we found ourselves shepherding changes through a combination of research funding, community awareness, and federal advocacy.  We also found that in order to sustain Noah and Laine’s exhausting medical routines and lack of sleep, we needed to find a way to keep ourselves healthy and happy.  I started practicing yoga about three years into our Battens journey.

Through my yoga practice, I learned about the ‘Lotus Flower.’ I think the most interesting symbolic aspect of this plant is how it comes to life. Typically, the lotus is born from muck and mire. Yes! From sludgy, slimy waters, this brilliant blossom emerges. I learned we can make the best of our crummy environment and rise above. During those long Batten days, I focused on the beauty that my children– Noah, Emily, Laine & Colette have brought to me…they are each my lotus flowers and Batten was the murky waters.

I believe this symbolism doesn’t have to be applied to just my life, many can use it in their daily lives – should they choose.

As I found this beautiful perspective, I was able to get up every day and enjoy my children as well as provide additional advocacy in the Batten disease community.  For the most part, I didn’t sink into murky waters.

While I ponder the bitter-sweetness of our life over the last ten years, I remind myself to look for the lotus flowers….the FDA approval of a CLN2 Batten treatment called Brineura, which due to the tireless efforts of hundreds of people is stalling the progression of Batten disease…the friends and family who came together with unwavering support… and the perspective I gained by learning to appreciate every moment of this murky, slimy, beautiful life.

Our family remains focused on our mission

Laine’s twin sister Emily is now 15 years old and continues to thrive and grow, singing, writing musicals, and excelling at school. We were also blessed with a healthy younger daughter Colette, who was born a year before Noah died. She just finished kindergarten. She shares a special relationship with Emily and lights up the room with her giggles, reminding us every day of sweet Noah and Laine.

We created Noah’s Hope to support research, raise funds, and inform the community before we knew that Laine would also fight this terrible disease. Now we pour ourselves into Noah’s Hope in memory of Noah and Laine, for our extended disease family around the world, and for Emily and Colette who watched their siblings travel this terrible path. We partnered with Hope 4 Bridget in 2014 to extend our efforts even further to help make a positive impact for the Batten and rare disease communities.