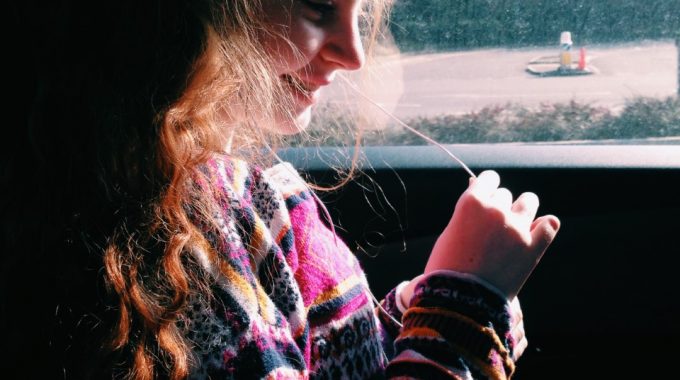 “Hannah was happier than any of us… and whether or not she was upset or scared, she never let it show. She was a really strong girl”

Liv Batterbee, speaks of family life with her sister Hannah, who lived with CLN3 until she was 23, and the impact it’s had on her.

We were a very happy family growing up. We were outdoorsy, and I have lots of really happy childhood memories.

Hannah was my big sister, we shared a room for years. She was the middle sister between me and my elder brother Jamie, with two years between each of us. As the middle child she bonded me and Jamie in a way, so now that she’s gone it’s changed the dynamic.

Hannah was about seven when she started having problems with her eyes, which is when they realised something might be wrong. Because Batten is such a rare disease, it wasn’t picked up straight away, and it was a bit of journey to get a diagnosis.

Until I was about eight we lived in North Yorkshire with grandparents next door and family not too far away. As Hannah’s needs increased, Mum and Dad did research and found The West of England School, a specialist centre in Exeter, for blind and partially sighted children, also with experience of Batten disease. My parents took the decision to relocate our family to Exeter so Hannah could attend the school.

At the time I was upset about leaving my friends and family, but now I can see it was the best thing for all of us. Putting Hannah’s needs first – it was the right and commendable thing to do.

The school proved to be brilliant and so supportive of Hannah. She had her own social circle there which gave her some freedom and independence even with everything that she was struggling with.

Finding out about Hannah’s disease

I only found out about Hannah being terminally ill when I was about 12, when our parents told me and my brother. Looking back, I can’t believe I didn’t realise before that. It was obvious that her eyesight and motor skills were in decline, but I just always saw her as Hannah.

That day we were on our way to school, and my parents turned the car round, and said we weren’t going to school. My brother and I were in the lounge when they told us. I remember my dad cried. I think that was harder than hearing the words because at that point I knew something was really wrong.

They had kept it from us to protect us and I can’t imagine how hard it must have been, to have gone through that grief journey without us knowing, and to have kept on parenting through it all. I think in some ways telling us must have been a big relief.

Hannah had a massive personality and everyone she met loved her. She had a mass of red curly hair, and she was quite a force to be reckoned with. Hannah loved anything Disney, especially Peter Pan, which was kind of a refuge for her as she grew older and lost her eyesight. It must have been a comfort to revisit her childhood films that she was so familiar with.

She was obsessed with music of any kind and she would sing really loudly with her headphones in regardless of whoever was around, in the back of the car or out in public. It could be quite embarrassing, but it was nice to hear her sing. Hannah loved our local donkey sanctuary, which we would take her to often. She also loved horse riding which she did through her school. She took it all in her stride completely fearlessly.

Hannah was even a torch bearer in the London 2012 Olympics. They suggested that as the torch was so heavy it could be attached to her wheelchair, but Hannah insisted that she would hold it herself, and carried it the entire way. She just smiled all day.

Hannah was happier than any of us were. She had so many reasons to be upset or scared, and whether she was or not, she never let it show. She was a really strong girl.

Nothing can prepare you

At the very end of my first year at university, my dad was supposed to be driving up to take me home, but instead my brother came. He said Hannah had had a seizure. Although she’d had seizures regularly, this time it was different: she was in a state of constant seizures and she never regained consciousness. It was horrible and, for her, I just hope that she wasn’t aware of any of it.

As weird as it sounds, for Hannah it was the best time to go. Through Batten disease she had lost enough of herself for us to know that she wouldn’t come back, but she had still been recognisable as Hannah. Also thankfully it meant she was spared the endless hospital stays, procedures and medications. It was more of a shock this way, but I think it was her way of saving us more pain.

When you’ve got a terminally ill family member who’s been ill for a long time you have this anticipatory grief. Because I’d known this would happen since I was 12, I had a false sense of security that I was somehow slightly prepared. But actually, when it happens you realise that nothing can prepare you for it. It is still a shock regardless.

I try to see it that she’s not struggling anymore, and the future was going to be a really hard battle for her, which helps.

It seemed to be a shock to everyone about how upset they were after she died. The workers at Hannah’s school were all deeply affected. For me to see the impact that she’s had on everyone else, and to hear them speaking about how much she changed their lives helped me. Her school bought a rainbow bench in her honour with a plaque saying ‘Hannah’s bench – a place to sit and remember.’

The horse riding association decided to make a trophy in Hannah’s name so every year we go and present it to a child for ‘strength and endeavour.’

In tribute to Hannah I decided to sponsor a donkey at the sanctuary she loved. By coincidence they have a donkey also called Hannah so I’m sponsoring her, and then I discovered she had arrived at the sanctuary on our Hannah’s birth date. I also got a little Peter Pan tattoo a year ago as a memory of her.

The past shaping the future

Looking back now, I can see how Hannah’s illness has impacted on the decisions which have shaped my life. I think one of the reasons I’ve done psychology at university is to get a better understanding of it all. I’d love to work in clinical psychology in areas like neuro degenerative diseases and neurological conditions such as epilepsy, to help other people. Being Hannah’s sister has definitely made me more in tune with other people.

Even being in Exeter: as much as I didn’t want to move at the time, it’s been the best thing for me. I’ve got a great group of friends, and had such a good education. So you could say even the simple thing of being where I am now, is because of Hannah.

Here is the poem that Liv wrote for Hannah’s funeral

The smiles, the laughs
I already miss them all
Listening to Horrid Henry audio tapes
And other insignificant things I can’t recall

You’ve achieved a lot in your short life
Even carrying the Olympic flame
And even at the end, the fire inside you
Refused to be tamed

Remember when Gran said to us
“We don’t say we can’t, we say we can”
Well now you can enjoy Neverland
And say hello to your friend, Peter Pan

A life without you,
It’s impossible to comprehend
I really don’t want to say goodbye
To my big sister and my best friend

We will never forget your infectious laugh
All your stories are itching to be told
Because at the end of every rainbow,
You’re our pot of gold