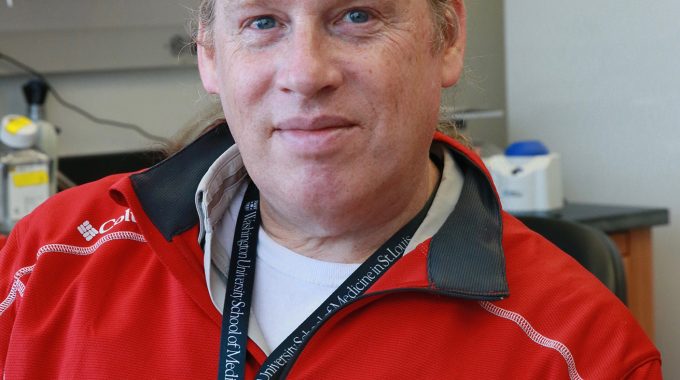 “As a scientist I am meant to be logical, totally rational. But my work looking at Batten disease is undeniably emotional”

Professor of Pediatrics, Genetics and Neurology, Jonathan Cooper tells his story about what led him to working in the field of Batten disease.

Jonathan Cooper is a leading international authority on the neuropathology of Batten disease or Neuronal Ceroid Lipofuscinosis (NCLs).

After decades of work in the ‘Batten’ space in the UK, Jon is now based in the US. He works at Washington University in St Louis and runs the Pediatric Storage Disorders Lab or PSDL. Jon is leading the scientific session of the upcoming virtual Batten Disease Support and Research Association (BDSRA) family conference in July 2020. He is also organising NCL2021 the next International Congress on the NCLs, which was postponed due to COVID-19, and will now take place in St Louis in October 2021.

I have been involved with the BDFA since its very earliest days when it was run by a JNCL parent, Irena Newcombe, who was one of the founders. I met her at a conference when I was still a postdoctoral fellow, and before I had my own lab.

A change of direction

My start with Batten disease was even before that, when I had a spell as a stay at home dad in Stoke on Trent in the mid 1990s. I think I was seen as a bit odd as there weren’t many house dads in Stoke at the time! However, for me it was a very formative time and brought about a complete change of direction in my career. From working on diseases of old age, I knew I wanted to work in the sphere of children’s diseases.

Then the opportunity came up to work in the US in San Francisco on a “disease you have never heard of.” This happened to be Batten disease, and really only knew it was a disease that affected children, and that it was under-recognised, and this fitted with me emotionally. Effectively this was the turning point of my life, both personally and professionally.

I will never forget the first family I met with Batten disease, and their child. She was called Natalie and I still have her photograph above my office computer. Her parents Liz and Dave came in to see me from San Jose. They must have wondered who this strange British person was, who had come to find out more about this disease. Meeting them and hearing everything about their Batten disease experience was a real eye opener. It was the really human side of the disease and how it affected not just Natalie but her brother, and every part of the family’s life. Everything. Something in my head went ‘clunk’ at that moment, and I felt a real emotional connection to doing something for this family and these diseases.

I have maintained a close connection to many Batten families all the way through my career. I hope I can help them not just with my science skills, but by being able to translate ‘science speak’ into the language normal people use. As a scientist I am meant to be logical, totally rational. But my work looking at Batten disease is undeniably emotional. The science is fascinating, but personally I have always found each family’s experience utterly compelling.

At the time we started there were no ‘Batten’ models. We had only just learnt there were genes called CLN1, CLN2 and CLN3. 25 years later we are in a totally different place. When the first enzyme replacement studies began, and Biomarin began to take an interest, work in our lab helped lead up to the clinical trial that proved successful. Being involved at several steps along the way, to the point where we now have something that can alter the disease course, has been very fulfilling. In the early days we just wouldn’t have thought these things were possible. It would have sounded like science fiction, but we are now at least partly living that reality.

There have been so many emotional stories along the way. Sadly for some families this treatment came too late, and there is still so much we need do for the other types of NCL. We are certainly in a much better place now, but we have much further to go so that we can reach the same point for all Batten families.

Working hard for a better future

The field has certainly moved on and a variety of therapies, like gene therapy are now being tested in labs and even reaching clinical trials for other NCLs. Much of this is based on gaining a much better understanding of how the different types of Batten disease affect the brain and the rest of the body. I now find myself back in the US, and we are building a group of scientists here in St Louis that all work on Batten disease or similar disorders. Together with scientists from all round the world our challenge is to make the same progress for all Batten families as has been made for CLN2. We’re not there yet, but will be working hard to get there as best we can.