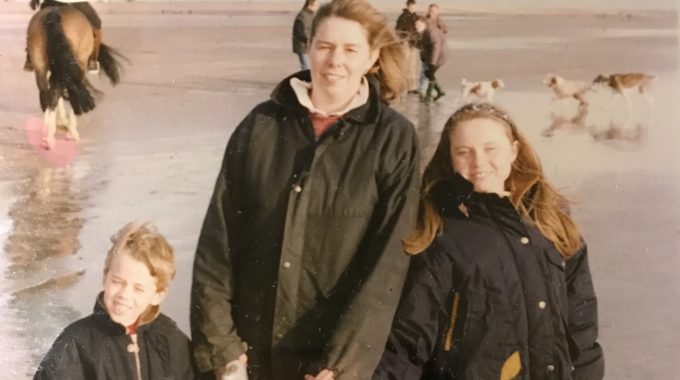 “The whole family were heartbroken – the devastation, the loss of our children’s future as we had hoped it would be.”

Pauline Docherty, who lost her children Joanna and James to CLN3, tells the story of how her journey led her to set up the BDFA.

My life hasn’t turned out the way I thought it would back in January 1990 when my son, James, was born. I already had a beautiful daughter, Joanna, born 20th July 1984 so life was good. Then it started. Jo’s teacher advised that Jo seemed to be having difficulties reading the blackboard. All had been well to that point – all her milestones reached and she was a bright, independent young lass.

We went to the opticians – she was short sighted we were told, glasses were prescribed (oh, how she hated them!). They didn’t help and cutting a long story short we were given a diagnosis of early onset macular dystrophy – ‘her eyesight wouldn’t get any worse’, we were told. Well, it did. Horrible times followed as we were made to feel like idiots – that Jo was ‘pretending not to see’ and ‘it was all in her head’! We knew that was rubbish.

I could write a book about what happened next as I know all of our families could – but the ‘highlights’ were that Jo went to Dorton House School, an amazing specialist school (sadly no longer in existence) where she flourished in this nurturing, understanding environment and for a while life settled down. Then she had her first seizure. The paediatrician we were referred to had actually seen a child with juvenile Batten disease before so he knew straight away. More tests and finally the diagnosis that we could barely believe or comprehend. Then the decision, do we have James tested? It was a no brainer really. By then he was five, so if affected his eyesight would soon start to deteriorate. More tests followed and yes, I was told over the phone that he too had the fatal gene.

The whole family were heartbroken. I can’t fully describe how we felt – the devastation, the loss of our children’s future as we had hoped it would be.

James followed his sister to Dorton House and life settled into a kind of pattern but a pattern that included watching my two wonderful, bright, cheerful, accepting children slowly deteriorate and lose their many skills. James being aware of what was happening to his sister and yet accepting that that was the way it was going to be.

And no specialist support – the school was wonderful, but we had no other families to talk to. The consultants I had access to knew little more than I did. Then I was contacted by SeeAbility to take part in a survey on support (or lack of it) and attend a family meeting. At last we met others facing the same challenges. We volunteered to meet with three other families and, from that meeting at Irena Newcombe’s house, the BDFA, for me, began. Unbeknown to me, Irena had had been working behind the scenes for a while to get us to this point.

The growth of the BDFA

The BDFA slowly found its way and began to grow as more families heard about it and we realised that there was a need for such an organisation to provide support, to be a centre of excellence, signposting families, social services, the medical professions. It has been a privilege to watch and be a small part of this caring organisation. The BDFA has had hard times recently but the team and the trustee board now in place are expertly placed to take the organisation forward and I am SO impressed with them and as always, with the families and children that have been affected by this truly devastating condition.

As for Joanna and James, the disease continued to take them. I have so many wonderful memories and needless to say, I miss them so much. Both moved to Heather House (an awe-inspiring SeeAbility residential home) when the time was right for them, Jo in December 2001 and James in April 2008 (three weeks before Jo died). James died on the 16th July 2016 – a bout of pneumonia finally weakened him. I was with both of them as they passed and cannot thank the Heather House staff enough for the love and support they provided.

My husband Jim found a plaque when we were on holiday and I’d like to finish with the words on it:

‘Those we love don’t go away,
they walk beside us every day.
Unseen, unheard, but always near,
still loved, still missed and very dear.’